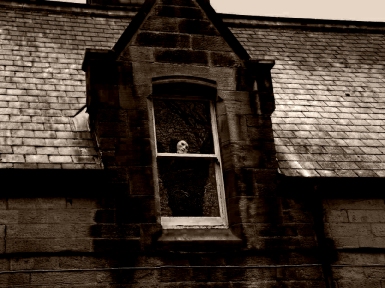 It’s a common enough question asked by paranormal investigators, ghost hunters, those being haunted, and the merely curious.

Sadly, the answers are also all too common enough as well, with people believing the old myths that a ghost is either some tragic figure or someone who was evil while still alive. It doesn’t help that so many of the popular paranormal shows on television continue to push this myth without empirical evidence to back it up. But I guess it makes for more suspense and drama to say that a place is haunted by a murder victim, a suicide or a demonically possessed serial killer. It is usually assumed that the ghost/s haunting a location are sad, angry, lost or confused, and that they haunt because they have unfinished business or their life ended so quickly that they don’t know they are dead.

Back when we all first caught the paranormal investigations”bug” it would be standard practice to assign someone in the group, typically the person given the position of “team researcher,” to find particular information on a haunted location that was to be investigated. Procedure was to find out who had lived/worked at the location, then find out who had died at the site, and from there try to find any deaths that were out of the norm, such as murders, suicides, accidents that caused sudden death, etc… If any abnormal deaths were found to have taken place these became the main focus of the investigation. People went with a preconceived idea.

It has been our personal experience that the majority of hauntings we have investigated were pretty benign and calm. The ghostly presences were not acting out as if they were angry or unhappy. The atmosphere felt relaxed, warm and even welcoming. Yes, we have had a few rare incidents where things actually got pretty scary, but they were not the norm.

When you prepare for your next investigation, or when dealing with a personal haunting, keep in mind that “restless spirits” might not be so restless after all. Maybe they just really loved their home, and it was a place of happy memories. Or maybe an heir from the past still feels a sense of responsibility to look after the old place. There are many positive reasons for why a past resident has decided to haunt a place they were attached to.

Drop those preconceived expectations and go in with an open mind that hasn’t been filled with a bunch of sinister drama. Fear and horror are great for ratings, but cannot replace integrity and facts if you wish to provide a well-rounded and honest report on your investigation.